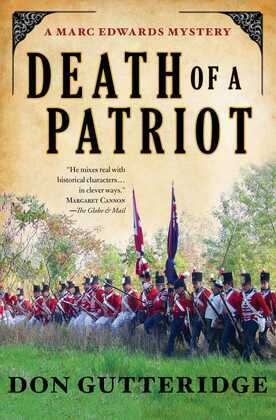 Death of a Patriot

As the winter cold settles over Upper and Lower Canada, sparks still fly between the provinces. But while the fate of the colony is debated in the British parliament, a more pressing danger threatens the fledgling state: American militia is raiding across the border, intent on annexing the Canadian provinces by any means necessary.

Following a battle along the border, a high-ranking American officer is wounded and captured. Brought back to Toronto, he is scheduled to be tried and executed in order to send a message to the encroaching Americans. The American colonel has a penchant for showmanship, and trouble always follows closely in his wake. But the American colonel?s boasts of escape and revenge are cut short when he is poisoned in his cell.

All fingers point to Billy McNair, a young Canadian militia officer and the same man who saved the American colonel from dying from his wounds on the battlefield. Into this turmoil steps Marc Edwards, a decorated army officer who has traded his military uniform for a lawyer?s robes. Marc is convinced that the accused is innocent, and so, with the aid of Constable Cobb, he sets forth to track down the killer.

But the investigation is nowhere near straightforward. Spies are everywhere, spreading lies and half-truths, and everyone has an agenda, some personal and some political. With time running out and the ever-present threat of attack from a foreign army looming, Marc must rely on his every skill to secure a future not only for his friend, but for his entire country.