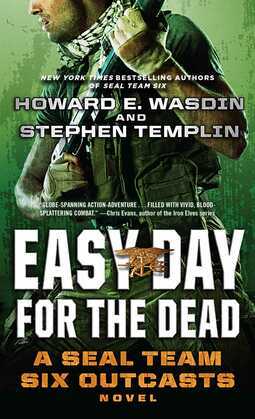 Easy Day for the Dead

Infusing the hardcore intensity of their New York Times bestselling memoir, SEAL Team Six, into two pulse-pounding novels, Howard E. Wasdin and Stephen Templin plunge readers into the electrifying action of the Outcasts, the elite SEAL warriors who covertly defy the rules when America’s safety is on the line. They are the heroes the world will never know…

Working under the radar in Special Ops unit Bitter Ash, these men and women take on the missions no one else wants. Every op is the highest possible risk and any moment could be their last. Now, they must parachute into the harsh desert on the border with Afghanistan, to meet a beautiful agent who will lead them to an Iranian biological warfare site they are to destroy with a suitcase-size nuke. And, like most missions, nothing goes according to plan, with a maniacal Revolutionary Guard officer a razor’s edge away from exposing them. Then the team must free a hostage in Lebanon before the fight takes them halfway around the world?in a frantic battle of courage and stealth that America cannot afford to lose.