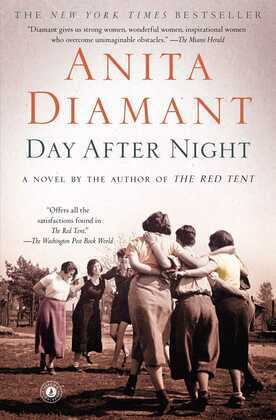 Day After Night: A Novel

by Anita Diamant (Author)
Excerpt
Fiction
warning_amber
One or more licenses for this book have been acquired by your organisation details
EPUB
Unlimited loans, 2 years, One at a time
Details

Just as she gave voice to the silent women of the Hebrew Bible in The Red Tent, Anita Diamant creates a cast of breathtakingly vivid characters—young women who escaped to Israel from Nazi Europe—in this intensely dramatic novel.

Day After Night is based on the extraordinary true story of the October 1945 rescue of more than two hundred prisoners from the Atlit internment camp, a prison for “illegal” immigrants run by the British military near the Mediterranean coast south of Haifa. The story is told through the eyes of four young women at the camp who survived the Holocaust: Shayndel, a Polish Zionist; Leonie, a Parisian beauty; Tedi, a hidden Dutch Jew; and Zorah, a concentration camp survivor. Haunted by unspeakable memories and losses, afraid to hope, the four of them find salvation in the bonds of friendship and shared experience even as they confront the challenge of re-creating themselves in a strange new country.

Diamant’s triumphant novel is an unforgettable story of tragedy and redemption that reimagines a singular moment in history with stunning eloquence.