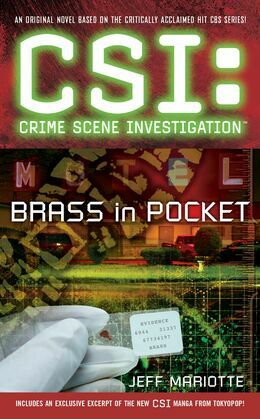 Far from the glittering lights and 24/7 spectacle of the Strip, the Las Vegas Crime Lab's team of investigators is gearing up for a rough night ahead.... A brutal shooting at a cheap motel may be business as usual for CSIs Catherine Willows and Nick Stokes, but as they process the crime scene and quickly identify the victim as a noted local private investigator, nothing could prepare them for the shock of finding physical evidence belonging to none other than Detective Jim Brass.... Meanwhile, CSIs Greg Sanders and Riley Adams are called to a nearby airport where they must face the ultimate locked room mystery: how a pilot flying solo in a small private plane wound up murdered while miles above the ground....