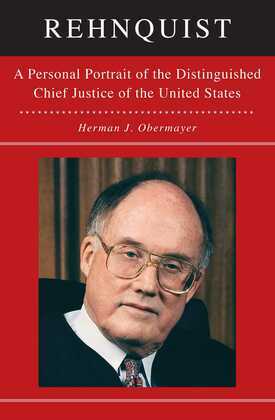 "This book is a final act of posthumous loyalty. Without it, history will have an incomplete -- and I believe unbalanced -- picture of the remarkable man who was the sixteenth chief justice of the United States, a man I was proud to call my friend."


The impact of Chief Justice William Rehnquist -- who served as a Supreme Court justice for a third of a century and headed the federal judiciary under four presidents -- cannot be overstated. His dissenting opinion in Roe v. Wade, and his strongly stated positions on issues as various as freedom of the press, school prayer, and civil rights, would guarantee his memory on their own. Chiefly, though, William Rehnquist will always be remembered for his highly visible role in two of the most important and contentious political events of recent American history: the impeachment trial of President Bill Clinton in 1999 and the Supreme Court's decision that made George W. Bush the victor in the presidential election of 2000.

Despite his importance as a public figure, however, William Rehnquist scrupulously preserved his private life. And while his judicial opinions often inflamed passions and aroused both ire and praise, they were rarely personal. The underlying quirks, foibles, and eccentricities of the man were always under wraps.

Now, however, journalist Herman J. Obermayer has broken that silence in a memoir of their nineteen-year friendship that is both factually detailed and intensely moving, his own personal tribute to his dearest friend. In these pages, we meet for the first time William Rehnquist the man, in a portrait that can only serve to enhance the legacy of a Chief Justice who will be remembered in history as being among America's most influential.