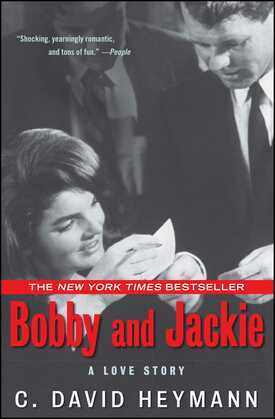 From New York Times bestselling author C. David Heymann, an in-depth and controversial look at the much talked about but never fully revealed relationship between Jacqueline Kennedy Onassis and Robert F. Kennedy.

Few writers have immersed themselves in the world of the Kennedys as completely or successfully as C. David Heymann, whose Jackie Kennedy Onassis biography, A Woman Named Jackie, reached #1 on the New York Times bestseller list, sold more than a million copies in hardcover, and was hailed by People as the Best Book of 1989. Now he draws on his impressive list of sources and impeccable insight to reveal the truth behind one of the most tantalizing relationships in American history.

Readers have long been fascinated by the rumored love affair between Jackie Kennedy and Bobby Kennedy. With Bobby and Jackie, they will finally get behind-closed-doors access to the emotional connection between these two legendary figures. An open secret for decades among Kennedy insiders, their affair emerges from the shadows in an illuminating book that only the author of The Georgetown Ladies' Social Club and American Legacy could produce. This is the book that readers will be talking about for years to come.