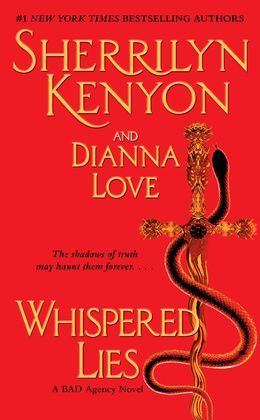 In the suspenseful new thriller from New York Times bestselling coauthors Sherrilyn Kenyon and Dianna Love, a Bureau of American Defense agent must join forces with an informant he can neither trust nor resist.

Bureau of American Defense operative Carlos Delgado has spent the past sixteen years watching over his shoulder, waiting for death to catch up to him. His luck runs out when BAD intercepts an unexpected tip on the number one threat to United States security: the Fratelli de il Sovrano. Their best hope for uncovering a deadly plan that risks countless lives and threatens economic chaos just days before the presidential election is to capture a mysterious informant known as Mirage. But when Carlos takes her into custody, Mirage is not at all what he expected -- and neither is the threat she poses to the secrets he would die to protect.

Gabrielle Saxe has hidden from a killer for the past decade, sending anonymous tips on international criminals to intelligence agencies around the world. When a postcard arrives from a friend who is supposed to be dead, she takes a risk that catapults her into the midst of dangerous operatives on a treacherous mission -- and into the arms of a man who is duty-bound to surrender her to Interpol as an international felon. Carlos is the last person Gabrielle should trust and the only one standing between her and death. But little does she know, she holds the key to his survival as well....