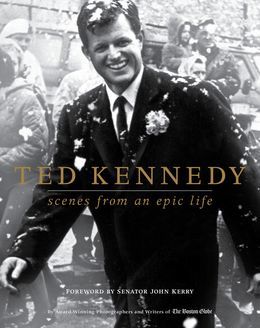 The extraordinary life of senator Edward Moore Kennedy captures two vivid stories: one is of an iconic senator who experienced the greatest of triumphs and the most devastating of losses, and the other is a chronicle of the most dramatic moments in our recent American history, including the assassination of a president and the struggle for civil rights. Through more than two hundred stunning black-and-white photographs pulled from the pages of The Boston Globe and its extensive archives, Ted Kennedy: Scenes from an Epic Life provides a gorgeous visual account of Ted's incredible journey from his joyous birth to the tragic announcement of his battle with brain cancer, including highlights from his childhood in New York, Hyannis Port, and London; his days at Harvard and in the Senate; and his roles as devoted brother, husband, father, uncle, and grandfather.

In this unique collection, archival materials and fresh interviews combine to create a richly detailed portrait of the man known to many as Uncle Ted. Vibrant photographs, most never before published in book form (and many unseen for decades), as well as essays and quotations illustrate the man and the statesman from a perspective that is both intimate and objective. It is a collection in which Ted's closest and keenest observers provide the context necessary to appreciate his place in this most famous of American families.

Here you will find, among the many unforgettable photographs featured in these pages, contributions by such illustrious names as Stan Grossfeld, Ulrike Welsch, Ollie Noonan Jr., Paul J. Connell, and Ted Dully. Featured essays include the reflections of the Globe's former Washington bureau chief, Martin F. Nolan, and longtime photojournalist Bill Brett. Their images and words bear eyewitness testimony that will resonate with anyone who lived through the Camelot years or simply seeks to understand the Kennedy mystique. Ted Kennedy: Scenes from an Epic Life has no equal because Ted Kennedy's long, complicated relationship with the press has no equal. It is the rarest kind of pictorial history: it is history in the making.