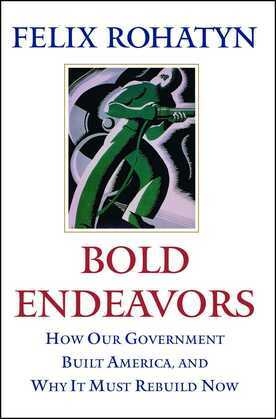 Bold Endeavors: How Our Government Built America, and Why It Must Rebuild Now

Bold Endeavors is a compelling narrative of ten large and transformative events in American history. It is an absorbing journey through the past as we read about determined national leaders -- Jefferson, Lincoln, Teddy Roosevelt, FDR, and Eisenhower -- who found the will, steadiness, and political acumen to make decisions that were often unpopular but that proved to be visionary -- decisions that are the building blocks of America's destiny.

Rohatyn begins with the diplomatic intrigues of the Louisiana Purchase, which doubled the size of the country; moves to the controversial construction of the Erie Canal, which opened a water route to the West; then continues to Lincoln's resolute support for the transcontinental railroad, Land Grant colleges, and the Homestead Act; documents the strategy -- and ruthless determination -- that built the Panama Canal; details the visionary and pragmatic politics that allowed FDR to bring electricity to rural America and use the Reconstruction Finance Act to help pull the country from the grip of the Depression; captures the foresight of national purpose which led to the G.I. Bill, which propelled the nation forward; and describes the creation of the interstate highway system that modernized America.

Bold Endeavors is an urgent call for present-day action in this time of grave national crisis. "The nation is falling apart -- literally," Rohatyn warns. "America's roads and bridges, schools and hospitals, airports and roadways, ports and dams, water lines and air control systems -- the country's entire infrastructure is rapidly and dangerously deteriorating."

To reverse this catastrophic degeneration and create tens of thousands of new jobs, Rohatyn offers a carefully reasoned and practical solution. Bold and imaginative political leadership must use the power and the resources of the federal government to finance the rebuilding of the nation's infrastructure.

Rohatyn's page-turning case studies are precedents for purposeful, resourceful, and tenacious leadership that is necessary to accomplish both the rebuilding of America and the country's emergence from its present financial crisis. These bold endeavors from the nation's past are instructive, a guide and an inspiration for Americans today. If the nation is to be rebuilt and its infrastructure renewed, if the country is to emerge from the present economic crisis and reclaim its position of unqualified strength and leadership in world affairs, then it must be guided by the vision, determination, and investments that originally helped create a secure and prosperous America.