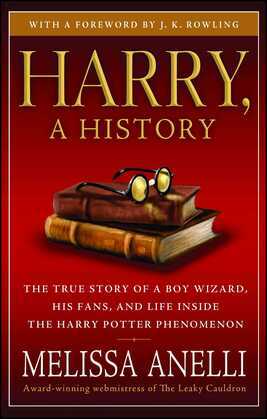 Melissa Anelli wears a ring that was a gift to her from J.K. Rowling, given as a measure of appreciation for the work she does on The Leaky Cauldron, where her job entails being a fan, reporter, guardian, and spokesperson for the Harry Potter series.

For ten years, millions of fans have lived inside literary history, the only fans to know what it was like when Harry Potter was unfinished. When anticipation for a book was just as likely to cause a charity drive as a pistol shootout. When millions of rabid fans looked to friends, families, neighbors, forums, discussion groups, fan fiction and podcasts to get their fix between novels. When the death of a character was a hotter bet than who'd win the World Series. When one series of books had the power to change the way books are read.

This has been a time when a book was more popular than movies, television, and video games. The series has spawned a generation of critical thinkers and new readers. The New York Times changed the way it reported book sales just to avoid a continual overpowering of its bestseller list.

These events must be given their proper context, and this moment must be preserved.  The series will remain important to literature and pop culture, but the experience will change. Harry's fate will be as commonly known as the identity of Luke Skywalker's father, and readers who never had to wait for a Harry Potter book will have no idea what transpired when the series had hundreds of millions of people waiting desperately for the next volume.

We are the first wave of Harry Potter fans, the ones that are living in the time that shapes how Harry Potter will be remembered for all time. But when this era is over, fans will need some way to remember this strange, wonderful, dizzying experience. Future fans, too, will want to know what they missed. Harry Potter will exist as a seven-book series, but without the indivisible story of the cultural, literary and emotional impact the series has made, the story is incomplete. How can a fan understand Harry Potter without hearing about the midnight book parties, the scams, the theories, the burglaries, the bets, the bannings, and most importantly, the worldwide camaraderie spurred on by mutual love of a boy wizard? How can they know how Harry Potter changed and touched the lives of so many without hearing it first hand?

Harry, A History tells this story.  It tells the personal story of Melissa Anelli's journey through the very heart of Harry Potter fandom.  And wraps this phenomenon up into one narrative, factual volume - one book that tells what happened when Harry Potter met the world.