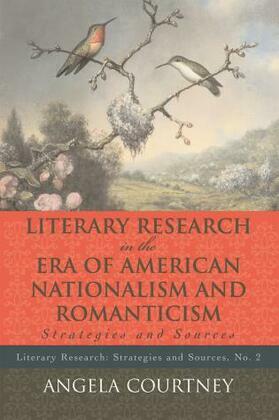 Literary Research and the Era of American Nationalism and Romanticism

The early years of American nationhood, beginning at the close of colonial rule and ending with the onset of the Civil War, saw both a young country and its literature grow in confidence and develop an awareness of self-identity. Pride in the new nation was a primary characteristic of much literary output in the early years of the country, whether in the form of fiction, poetry, drama, essay, travel writing, or journal. As the country grew and generations began to be born on the new land, Romanticism took hold, lauding not only the construct of the nation but also the natural power and potential of the country. This era of American literary expression has left behind a rich legacy of traditionally canonized authors, as well as material published in the growing periodical press that was of immediate importance to the population at the time.

Literary Research and the Era of American Nationalism and Romanticism: Strategies and Sources examines the resources that deal with the literature produced in the approximately 70 years of antebellum American literature. Covering all formats, the volume discusses bibliographies, indexes, research guides, archives, special collections, microform, and digital primary text resources and how they are best utilized for a literary research project. Suggestions are offered for best practices for research while exploring a wide selection of resources that run the gamut from classic standards of American literary bibliography through contemporary open-access digital resources.