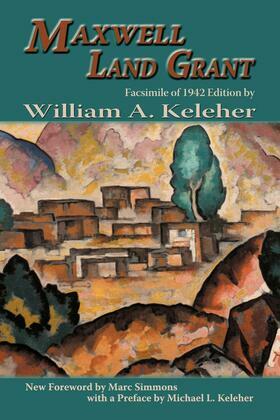 When the United States acquired New Mexico by invasion and conquest on August 15, 1846, it inherited a land grant problem of considerable magnitude. This problem continued for decades until 1870 when the United States Congress suddenly declined to act at all on any New Mexico grant claim. Among the grants that had been confirmed, however, was the Miranda and Beaubien, or Maxwell Land Grant, and that is the dominant theme of this book. Originally made in 1841 to Guadalupe Miranda and Charles Beaubien under Mexican rule, the Maxwell Land Grant was determined to embrace almost two million acres of land?2,460 square miles. Politicians, Indians, courts, ministers of the gospel, early day settlers, and soldiers, all had their place in the story of the Grant. Governor Manuel Armijo, the last chief executive under Mexican rule, Padre Martinez of Taos, Lucien B. Maxwell, Kit Carson, Charles Ben, Dick Wootton and many another old timer live again in these pages that read like fiction but are, in fact, totally true accounts. WILLIAM A KELEHER (1886?1972) observed first hand the changing circumstances of people and places of New Mexico. Born in Lawrence, Kansas, he arrived in Albuquerque two years later, with his parents and two older brothers. The older brothers died of diphtheria within a few weeks of their arrival. As an adult, Keleher worked for more than four years as a Morse operator, and later as a reporter on New Mexico newspapers. Bidding a reluctant farewell to newspaper work, Keleher studied law at Washington & Lee University and started practicing law in 1915. He was recognized as a successful attorney, being honored by the New Mexico State Bar as one of the outstanding Attorneys of the Twentieth Century. One quickly observes from his writings, and writings about him, that he lived a fruitful and exemplary life. He is also the author of ?Turmoil in New Mexico,? ?Violence in Lincoln County,? ?The Fabulous Frontier,? and ?Memoirs,? all from Sunstone Press.