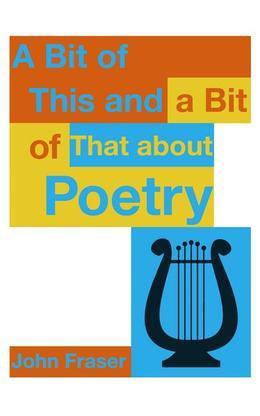 A Bit of This and a Bit of That About Poetry

A reviewer of JOHN FRASER'S widely praised Violence in the Arts (1973) spoke of encountering in it "an extremely agile and incessantly active mind that illuminates almost every subject that he touches." As a reader of poetry he is in search of felt life and expressive form. He feels his way forward through poems as speech acts, rather than latching onto whatever Big Poetic Truths they are presumed to be disclosing, or treating them as raw material to be given significance by Theory. And he enters them from a variety of directions.

The components of A Bit of This and a Bit of That about Poetry include:
—A fast, funny bit of intellectual autobiography.
—A tracing of the stylistic changes by which poetry ca 1880-1920 had muscle and realworld grounding restored to it.
—A re-entry into his formative childhood experiences of poetry in the 1930s, including winning a BIG school cup at age ten by reciting forty proto-symbolist lines from Tennyson's 'Idylls of the King', whose linguistic strangeness he recreates here.
—Jargon-free commentaries on formal and referential aspects of a dozen of his favorite poems, with their glow-worms, and gondolas, and garlic, and so forth.
—A spelunking trip through the remarkable inner spaces opened up by the uncoupling of syntax from stanzaic form in George Herbert's "Church Monuments."
—Three common-language forays into theoretical matters (symbolism, imagination, genius, etc), with a healthy refusal to be awed by the Byzantine structures that have grown up around them.

—An interactive mix of observations and quotations about a variety of topics, including Greek and the Book of Nature, thrillers as paradigms, high Romanticism, lovely pop lyrics ("The sigh of midnight trains in empty stations"), and the Demon Weed.
Fraser's celebrations of plenitude and the energy-charged flow of verse make A Bit of This and That a book that can be enjoyed whether one is primarily into free verse or more regular kinds.