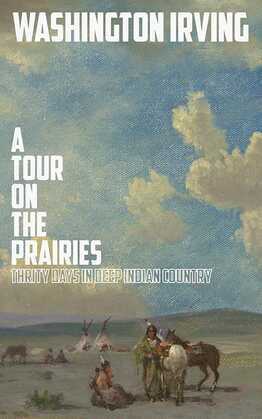 A Tour on the Prairies

In 1832, Washington Irving, America?s first literary superstar, returned to the United States after seventeen years abroad and swiftly set out to explore Pawnee country?the wild uncharted territory deep in the young nation?s interior. It was a part of the country few white men had set foot in and even fewer had written about it?and certainly none as famous as Irving.

Owing to a chance encounter on a steamboat with the newly appointed Indian Commissioner, and embracing an opportunity to silence critics who had begun to doubt his patriotism (after so much time abroad), Irving finds himself sleeping under the stars, traversing hostile plains, and venturing blindly into the unknown. He discovers a certain kind of tranquility in the open air and relishes the traditions and culture of the Pawnee. Irving kept a daily account of his excursion into what is now Oklahoma, and upon his return home, spun this fabulously entertaining and groundbreaking work. With unparalleled descriptions of the natural terrain?a land of giant flowing rivers and endless golden plains?and vivid depictions of the lives in Native Americans, A Tour on the Prairies stands as a classic portrait of what life was like out West before chronic warfare left the plains and the population decimated. Irving?s book became a huge success when it was originally published and quickly silenced critics who questioned his affection for his homeland.