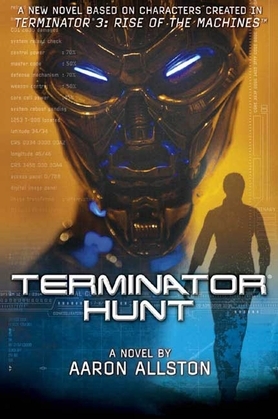 Riding the crest of popularity following Terminator 3: Rise of the Machines, Terminator Hunt continues the action where Aaron Allston's first Terminator 3 novel, Terminator Dreams left off, with an exciting original story of John Connor, Kate Brewster, and the human Resistance battling Skynet and its deadly robots.

2029 A.D.: Paul Keeley is a member of the Resistance who died over a year ago-or so everyone thinks, until he awakens in a hospital room and stumbles out into a raging battle between John Connor's elite team of Hellhounds and a group of Skynet robots led by the deadly Terminatrix. Back at Home Plate, Resistance headquarters, members of the Resistance discover that Paul has been brainwashed by Skynet. Living in a computer-simulated dream of the twentieth century, Paul, an expert on twentieth century life, was being used as part of an effort to train the T-X terminator for a time jump. John and Kate have no way of knowing where the jump will occur, so to prevent it from happening at all, they launch a daring plan to use John Connor as bait to capture the T-X. Meanwhile, Paul remains under suspicion, since no one knows how the brainwashing may still affect him.

Capturing the T-X proves to be a deadly task with consequences nobody could foresee. The danger and suspense mount as Resistance action leads to an epic battle pitting human ingenuity and sheer courage against the coldblooded logic of machine intelligence. Fans of Terminator 3: Rise of the Machines will not be disappointed.