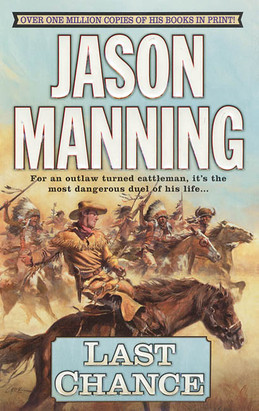 It may be the twilight of the Old West but the sun's not about to set on Ethan Payne. The tough-as-nails gunslinger is still holding strong to the traditions that made him notorious. A new trade is giving him the chance to prove it--as regulator for a Wyoming cattleman's association. But when an innocent man is killed, Payne's spirit dies long with him. Now it's the fearless outlaw who needs to be rescued. And Buffalo Bill Cody's the one to do it.

A U.S. scout who rode out the civil War in glory, Cody's become the Wild West's greatest showman. Now that he's got Payne in the act, it's only going to get wilder. The biggest draw Cody ever bankrolled, Payne is riding high once again. Especially when the tour takes him back to Chicago, and back to beautiful Lilah.

But the past--like vengeance--never dies. An enemy's got a score to settle. And in Last Chance by Jason Manning, Payne had better watch his shadow if he doesn't want his new dream to go up in smoke.