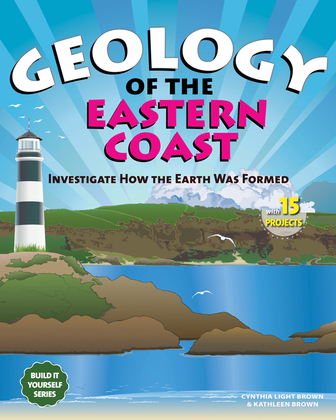 Geology of the Eastern Coast: Investigate How the Earth Was Formed With 15 Projects

Taking a unique approach to a fascinating region of the United States, this activity guide looks at the underlying processes that have shaped the Eastern Coast. Beginning with the connection between geology and geography, the chapters move into a discussion of plate tectonics and landforms such as the Appalachian Mountains, Piedmont area, and Coastal Plains. The aspects of climate, rivers and lakes, and the ecosystems of the temperate forest and wetlands—including bayous and the Everglades—are covered in detail. Engaging sidebars explain why the New River is one of the oldest in the world, how once-endangered alligators are now thriving, how hurricanes form, and more. Combining fun facts with hands-on experiments, this handbook features projects such as building folded mountains, creating dissolving “corals,” and making an eye of a storm.