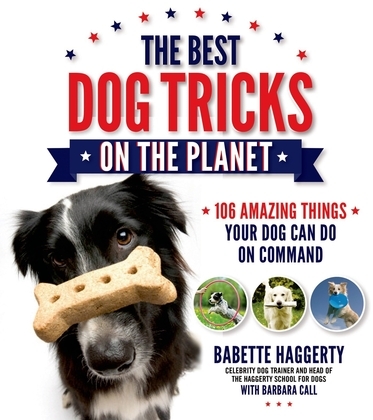 The Best Dog Tricks on the Planet

Featured on the Today show!

Not only does training your dog new tricks give you something to show-off at parties, but it also keeps your dog engaged and moving, and helps you become closer and more in-tune with your pet. And who better to learn from than the pros? Babette Haggerty has trained Jack Nicklaus' Golden Retriever to bark the number of his major tournament wins on command, Curt Gowdy's Rottweiler to say, "Go Reds" and Jimmy Buffett's Maltese to dance on cue to "Margaritaville".

In The Best Dog Tricks on the Planet, she offers up more than 100 of her best dog tricks, many of them featured by her famous father, Captain Haggerty, on David Letterman's Stupid Pet Tricks. Tricks include:

Step-by-step photos, more than 500 of them, pack the pages showing you the tricks to the tricks. In no time your dog will not only bring in the paper, play dead and roll over but also count objects, jump into your arms, crawl like a soldier and take a bow.

Babette was voted "Palm Beach's Favorite Dog Trainer." She has been featured on television and radio, including Animal Planet, Martha Stewart's "Living Radio" and most recently, the E! reality series, Married to Jonas. She has also published several articles in Dogs USA and Dog World magazines. She splits her time between Palm Beach and New York City with her two children as well as French Bulldog named Babe and German Shepherd named Barkley.