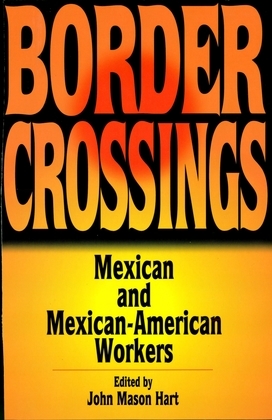 The history of Mexican and Mexican-American working classes has been segregated by the political boundary that separates the United States of America from the United States of Mexico. As a result, scholars have long ignored the social, cultural, and political threads that the two groups hold in common. Further, they have seldom addressed the impact of American values and organizations on the working class of that country.

Compiled by one of the leading North American experts on the Mexican Revolution, the essays in Border Crossings: Mexican and Mexican-American Workers explore the historical process behind the formation of the Mexican and Mexican- American working classes. The volume connects the history of their experiences from the cultural beginnings and the rise of industrialism in Mexico to the late twentieth century in the U.S.

Border Crossings notes the similar social experiences and strategies of Mexican workers in both countries, community formation and community organizations, their mutual aid efforts, the movements of people between Mexico and Mexican-American communities, the roles of women, and the formation of political groups. Finally, Border Crossings addresses the special conditions of Mexicans in the United States, including the creation of a Mexican-American middle class, the impact of American racism on Mexican communities, and the nature and evolution of border towns and the borderlands.