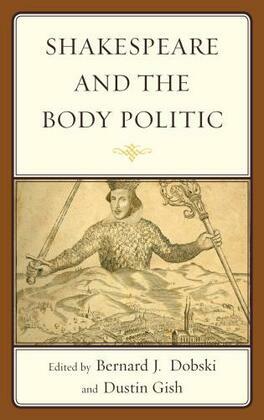 Shakespeare and the Body Politic

mate Shakespeare’s corpus, and one of the most prominent is the image of the body. Sketched out in the eternal lines of his plays and poetry, and often drawn in exquisite detail, variations on the body metaphor abound in the works of Shakespeare. Attention to the political dimensions of this metaphor in Shakespeare and the Body Politic permits readers to examine the sentiments of romantic love and family life, the enjoyment of peace, prosperity and justice, and the spirited pursuit of honor and glory as they inevitably emerge within the social, moral, and religious limits of particular political communities. The lessons to be learned from such an examination are both timely and timeless. For the tensions between the desires and pursuits of individuals and the health of the community forge the sinews of every body politic, regardless of the form it may take or even where and when one might encounter it. In his plays and poetry Shakespeare illuminates these tensions within the body politic, which itself constitutes the framework for a flourishing community of human beings and citizens—from the ancient city-states of Greece and Rome to the Christian cities and kingdoms of early modern Europe. The contributors to this volume attend to the political context and role of political actors within the diverse works of Shakespeare that they explore. Their arguments thus exhibit together Shakespeare’s political thought. By examining his plays and poetry with the seriousness they deserve, Shakespeare’s audiences and readers not only discover an education in human and political virtue, but also find themselves written into his lines. Shakespeare’s body of work is indeed politic, and the whole that it forms incorporates us all.