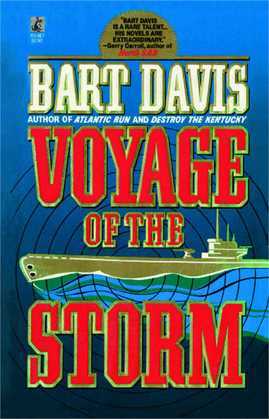 Voyage of the Storm

A vintage attack sub rises from the grave to torpedo a deadly terrorist plot!

Admiral Peter MacKenzie has stood at the helm of the most advanced submarines in the world -- the U.S. Navy's nuclear-powered lords of the sea. Now, when Hawaii and America's Pacific coast are at risk, he has but one vessel under his command: the H.M.S. Storm, a World War II sub salvaged from the bottom of the sea.

The Joint Chiefs of Staff in Washington have assigned Admiral MacKenzie to oversee the transfer of a shipment of plutonium from Russia to Japan. But fanatic Japanese terrorists have hijacked the deadly cargo in mid-ocean. Isolated on a South Seas island, MacKenzie and a small band of survivors are determined to raise the Storm and sink the terrorists before they unleash a ring of deadly fire.

Success could come at a terrible price: The terrorists have taken hostages, among them Peter MacKenzie's CIA agent wife, bearing their unborn child. The Storm is underway -- and it's a voyage into hell.