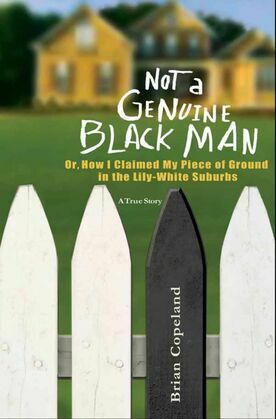 Not a Genuine Black Man: Or, How I Claimed My Piece of Ground in the Lily-White Suburbs

Based on the longest-running one-man show in San Francisco history--now coming to Off-Broadway--a hilarious, poignant, and disarming memoir of growing up black in an all-white suburb In 1972, when Brian Copeland was eight, his family moved from Oakland to San Leandro, California, hoping for a better life. At the time, San Leandro was 99.4 percent white, known nationwide as a racist enclave. This reputation was confirmed almost immediately: Brian got his first look at the inside of a cop car, for being a black kid walking to the park with a baseball bat. Brian grew up to be a successful comedian and radio talk show host, but racism reemerged as an issue--only in reverse--when he received an anonymous letter: "As an African American, I am disgusted every time I hear your voice because YOU are not a genuine Black man!" That letter inspired Copeland to revisit his difficult childhood, resulting in a hit one-man show that has been running for nearly two years--which has now inspired a book. In this funny, surprising, and ultimately moving memoir, Copeland shows exactly how our surroundings make us who we are.