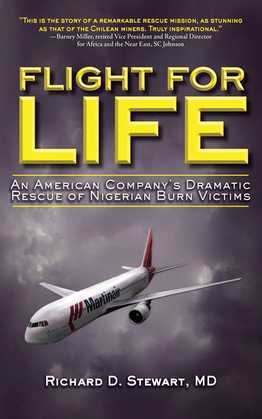 Flight for Life is the heart-stopping account of one of the most gripping rescue missions in African history. Told by a doctor involved in saving the lives of Nigerian workers who became victims of a tragic American chemical company explosion; Dr. Stewart and his colleague moved mountains and cut red tape to fly patients to one of the premiere burn centers in the United States.

At the time of the S. C. Johnson Company chemical plant explosion in 1982, there were no burn care centers in Africa. Its hospitals lacked the most basic accommodations for burn victims and would usually sedate anyone who was badly burned until they died. When the S. C. Johnson Company?s foreign subsidiary, based in Lagos, Nigeria, had a ruptured butane gas line that exploded, burning the skin and clothing of twenty-nine Nigerian employees, the company began a race against time to help the victims of the catastrophe. Teaming with the University of Michigan Trauma Burn Center, S. C. Johnson?s executives, and the U.S. embassies in England and Nigeria, Dr. Stewart (Johnson?s corporate medical director) converted a DC-10 airliner into an intensive burn-care flying hospital, staffed by a London medical team to keep the patients alive during the eleven-hour transatlantic crossing through an unexpected and dangerous storm at sea. This real-life rescue narrative illuminates the heroic lengths dedicated individuals will go to when lives are at stake.