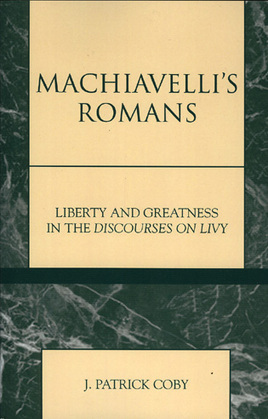 Machiavelli's Romans: Liberty and Greatness in the Discourses on Livy

Although Machiavelli is usually considered a pioneer among modern political philosophers, he read deeply in and was greatly influenced by the works of classical Roman thinkers such as Livy. There is thus a fundamental tension between the modern and the ancient within Machiavelli's philosophy; he is both a precursor to the Enlightenment and a throwback to republican Rome. This is the main thesis behind Patrick Coby's innovative study of the neglected Machiavellian classic Discourses on Livy. Coby argues that scholars have been too quick to dismiss the ancient antecedents of Machiavelli's thought, particularly with regard to the modes and orders of the Roman republic. The book seeks to resolve the central paradox of the Discourses, that Machiavelli recommends adoption of Roman modes and orders even though those modes and orders destroyed the virt_, the strength, which Machiavelli would have moderns resuscitate by imitating Rome. A sophisticated, highly engaging book, Machiavelli's Romans will be of special interest to political theorists, Renaissance scholars, and classicists.