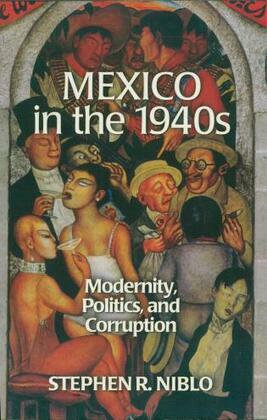 Mexico in the 1940s: Modernity, Politics, and Corruption

Attention to Mexico's history after 1940 stands in the shadow of the country's epic revolution of 1910D1923, and historians and scholars tend to bring their focus on Mexican history to a close with the end of the L_zaro C_rdenas presidency in 1940. Mexico in the 1940s: Modernity, Politics, and Corruption examines Mexican politics in the wake of Cardenismo, and the dawn of Miguel Alem_n's presidency. This new book focuses on the decade of the 1940s, and analyzes Alemanismo into the early years of the 1950s. Based upon a decade of intensive investigation, Mexico in the 1940s is the first broad and substantial study of the political life of the Mexican nation during this period, thus opening a new era to historical investigation.

Mexico in the 1940s offers a unique interpretation of the country's domestic politics during this period, including an explanation of how political leaders were able to reverse the course of the Mexican Revolution; an original interpretation of corruption in Mexican political life, a phenomenon that did not end in the 1940s; and an analysis of the relationship between the U.S. media interests, the Mexican state, and the Mexican media companies that still dominates mass communication today.

Mexico in the 1940s is an excellent volume for courses in Mexican history.