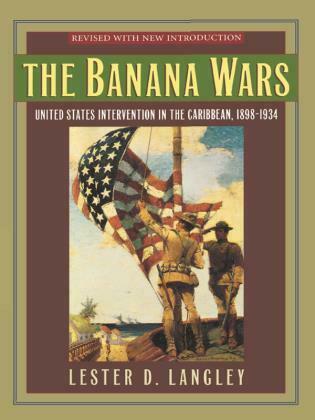 The Banana Wars: United States Intervention in the Caribbean, 1898-1934

The Banana Wars: United States Intervention in the Caribbean, 1898D1934 offers a sweeping panorama of America's tropical empire in the age spanned by the two Roosevelts and a detailed narrative of U.S. military intervention in the Caribbean and Mexico. In this new edition, Professor Langley provides an updated introduction, placing the scholarship in current historical context.

From the perspective of the Americans involved, the empire carved out by the banana warriors was a domain of bickering Latin American politicians, warring tropical countries, and lawless societies that the American military had been dispatched to police and tutor. Beginning with the Cuban experience, Langley examines the motives and consequences of two military occupations and the impact of those interventions on a professedly antimilitaristic American government and on its colonial agents in the Caribbean, the American military. The result of the Cuban experience, Langley argues, was reinforcement of the view that the American people did not readily accept prolonged military occupation of Caribbean countries.

In Nicaragua and Mexico, from 1909 to 1915, where economic and diplomatic pressures failed to bring the results desired in Washington, the American military became the political arbiters; in Hispaniola, bluejackets and marines took on the task of civilizing the tropics. In the late 1920s, with an imperial force largely of marines, the American military waged its last banana war in Nicaragua against a guerrilla leader named Augusto C. Sandino.

Langley not only narrates the history of America's tropical empire, but fleshes out the personalities of this imperial era, including Leonard Wood and Fred Funston, U.S. Army, who left their mark on Cuba and Vera Cruz; William F. Fullam and William Banks Caperton, U.S. Navy, who carried out their missions imbued with old-school beliefs about their role as policemen in disorderly places; Smedley Butler and L.W.T. Waller, Sr., U.S.M.C., who left the most lasting imprint of American empire; and dozens of Caribbean and Mexican political figures caught up in America's tropical experiment. Finally, the author speaks to current debates about unrest and conflict in the Caribbean with some disturbing reminders about earlier American experiences.