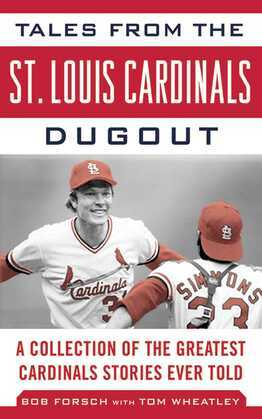 Offering readers more than just a sneak peek into the dugout, Bob Forsch?s Tales from the St. Louis Cardinals Dugout takes fans into the clubhouse, out to the bullpen, onto the mound, up to the batter?s box, around the base paths, along for the ride to spring training, and even on a fishing trip or two in this tribute to the long and storied tradition of St. Louis Cardinals baseball.

In his own witty style, Bob Forsch, known to many as ?Forschie? during his playing days, has drawn from his exciting history with the Cardinals to bring fans stories that are laugh-out-loud funny, like his rookie gaffes and lifelong antics with his older brother Ken, a fellow big leaguer and no-hit artist. Other tales are poignant, such as his tributes to St. Louis favorite Willie McGee, legendary broadcaster Jack Buck, and ?The Cardinal Way.? Some of the stories reveal inside tricks, like how to confuse sign stealers. Still more are rarely-told true confessions, like throwing at 2003 National Baseball Hall of Fame inductee Gary Carter, following Jim Kaat?s tips for doctoring a baseball, or playing silly clubhouse pranks on the superstitious Joaquin Andujar.

Forsch also includes the story of the pre-victory party that helped the Cardinals win the 1982 World Series?not even manager Whitey Herzog knew about that one. These stories and many more come to life in Tales from the Cardinals Dugout. No Cardinals fan?s bookrack should be without it.