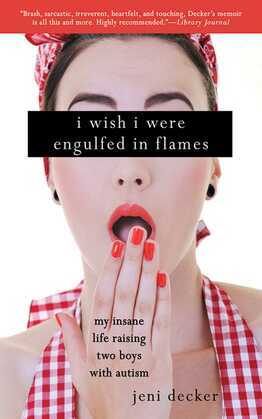 I Wish I Were Engulfed in Flames

Jeni Decker is five-foot nothing and one hundred and [redacted] poundsa self described roly-poly, forty-something, Reubenesque bon-bon of a gal, often called cute but never sexy. She has two sons with autism on opposite ends of the spectrum (Jake and Jaxson), a husband who prefers hunting to household chores, an Australian Shepherd named Sugar, and an albino frog named Humbert Humbert. This is her storya brash, personal, and some-times shocking memoir of one woman?s determination to raise two healthy kids with autism and keep her sanity in the process. It?s not always easy. Between poop? incidents, temper tantrums, and the helpful? advice about parenting from her fellow citizens in the grocery store, Jeni often finds herself wanting to throw something. With chapters like: Tickling the Weiner,? Why I Hate Pokemon,? Santa: Give it a Friggin? Rest, Already,? and Oprah?s the Reason My Kid Thinks I Want to Drown Him in the Tub,? I Wish I Were Engulfed in Flames also includes mini-chapters written by her eldest son, Jake.

Readers looking for laughter and inspiration will find it here aplenty, along with tons of surreal anecdotes that will have you either shaking your head in disbelief (for those unacquainted with the world of autism) or nodding with recognition (for those who are). As Jeni says, I developed a new normal.??