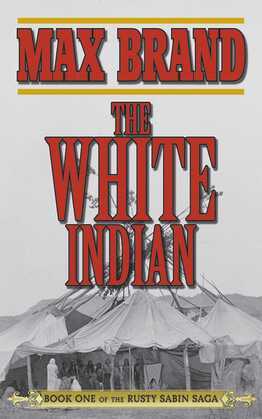 First serialized in 1933 in Argosy, this exciting initial installment of the classic Rusty Sabin trilogy introduces readers to the eponymous character and his back story. Rusty Sabin was a child when Cheyenne Indians raided the Sabin homestead and killed his mother. Just before she died, she put a rawhide cord with a green scabbard on it around his neck.
Raised by adoptive Cheyenne parents, Spotted Antelope and Bitter Root, Red Hawk--as Rusty is now known--refuses take part in the compulsory and brutal initiation into the tribe when he is fifteen. Abandoned as dead by his Cheyenne family, Red Hawk rides to the town of Witherell, the nearest white settlement.

Rusty's father lives on the outskirts of Witherell and has dedicated his life to killing Cheyenne warriors for destroying his family, becoming such a powerful adversary that the Cheyenne now call him Wind Walker. Red Hawk, who has no recollection of his white father, wants nothing more than to restore his reputation among the Cheyenne--and if his plan works, he may be able to rejoin the only family he has ever known. And so he plans to kill Wind Walker, the bitterest enemy of his people.