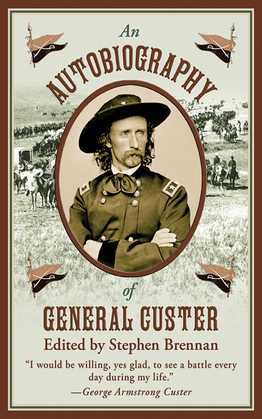 An Autobiography of General Custer

Taken from George Armstrong Custer's own writings, An Autobiography of General Custer is the “true story” of one of the most praised, most despised, but surely most remembered American military heroes. Indeed, few figures in our history were—in their own time, as well as in our own—so wildly cheered and so roundly hated.

Custer’s narration takes us from just after the Civil War, when, having gained a reputation as a bold and inventive leader of the cavalry, Custer was given command of an expedition to help subjugate the Native Peoples of the Great Plains and to force them onto reservations. His story touches on his own court martial and subsequent reinstatement to command. It ends shortly before he embarks upon the campaign that would eventually lead to the Battle of the Little Bighorn and “Custer’s Last Stand.” As Custer was unable to write about his most famous battle, the Autobiography concludes with an 1880s newspaper account of an interview with Sitting Bull himself after his escape to Canada, in which the great Chief looks back on the battle and offers his own point of view.

In the evenings, on post and during his various leaves, Custer would sit at the dining room table with his beloved wife, Libby, and together they would compose the various stories of his exploits that would eventually become the book My Life on the Plains, which was a bestseller in its time, and from which this autobiography is largely taken.