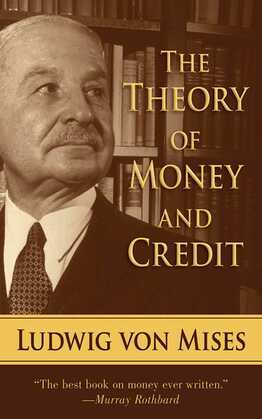 The Theory of Money and Credit

?It is impossible to grasp the meaning of the idea of sound money if one does not realize that it was devised as an instrument for the protection of civil liberties against despotic inroads on the part of governments.? ? from The Theory of Money and Credit

Originally published in 1912, Ludwig von Mises?s The Theory of Money and Credit remains today one of economic theory?s most influential and controversial treatises. Von Mises?s examination into monetary theory changed forever the world of economic thought when he successfully integrated ?macroeconomics? into ?microeconomics? ?previously deemed an impossible task ?as well as offering explanations into the origin, value and future of money.

One hundred years later, von Mises and the Austrian school of economic theory are still fiercely debated by world economists in their search for the solution to America?s current financial crisis. His theorems continue to inspire politicians and market experts who aim to raise up the common man and reduce the financial power of governments. In a preface added in 1952, von Mises urges the people of the world to see economic truth:

?The great inflations of our age are not acts of God. They are man-made or, to say it bluntly, government-made. They are the off-shoots of doctrines that ascribe to governments the magic power of creating wealth out of nothing and of making people happy by raising the ?national income.??

?The best book on money ever written.? ?Murray Rothbard, economist and historian

?The greatest economist of the twentieth century.? ?Sandeep Jaitly, economist