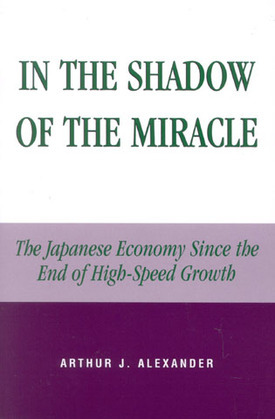 In the Shadow of the Miracle: The Japanese Economy Since the End of High-Speed Growth

Japan is living in the shadow of its economic miracle. Its stagnation and decline relative to other advanced economies since the early 1990s is a consequence of business and government difficulty in breaking away from once-successful practices. The Japanese postwar economic miracle created the world's second largest capitalist economy. This remarkable performance, in the face of such enormous obstacles, helped solidify, even sanctify, the institutions, methods, and political arrangements associated with the economic miracle. Based upon a decade of research articles distributed in the Japan Economic Institute's weekly report on Japan, In the Shadow of the Miracle analyzes the sources of Japanese growth and the nature and scale of its current economic problems. Chapters examine the steps being taken by Japan's government and business leaders to address the mounting national economic problems and the impact on Japan of the wider Asian financial crisis (1997-99). A final section addresses the question of whether Japan is fundamentally different from other advanced economies.