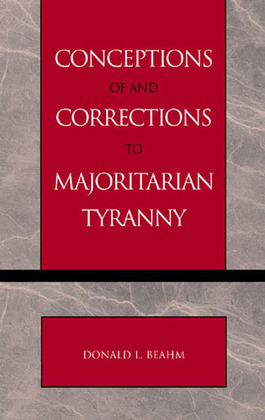 Conceptions of and Corrections to Majoritarian Tyranny

The fundamental tenet of democracy is that the majority rules. Yet as James Madison wrote, 'Wherever the real power in a Government lies, there is the danger of oppression.' In this focused new work, Don Beahm synthesizes some of the most powerful conceptualizations of, and corrections to, the majority tyranny as explicated by James Madison, Alexis de Tocqueville, John C. Calhoun, Robert A. Dahl, and Lani Guinier. In conjunction with this synthesis, Beahm presents his analysis of the main causes of majoritarian tyranny, concluding that while American two-party politics, winner-take-all districting, and voting system may be reformed, the social causes of individual and group interests may only be corrected by proportional representation.