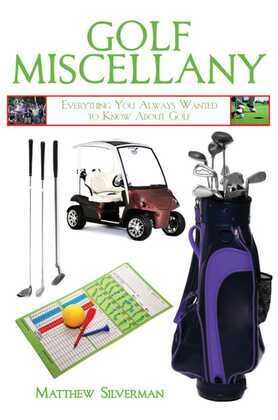 What causes a golf ball to hook or slice? What are the origins of the terms bogey? and birdie?? Why was Jack Nicklaus called The Golden Bear?? Why is the Masters champion presented with a green jacket? How many tournaments did Byron Nelson win in 1945?

With Golf Miscellany, the fascinating history and lore of golf are finally revealed! For example, the reason a golf ball hooks or slices is that its spin drags a layer of air across one surface of the ball faster than it does across the opposite surface. Bogey? refers to a score of one over par on a golf hole, the term originating from a British song from the late nineteenth century. Jack Nicklaus was dubbed The Golden Bear by his former agent, Mark McCormick, because he was large, strong, and blonde.? Every Masters champion since 1949 has been presented with a green jacket, indicating their membership in the exclusive private club. And the great Byron Nelson won a whopping eighteen tournaments in 1945 including eleven in a row, both records which stand to this day.

Packed with all manner of delightful surprises, beautiful illustrations and photos, and surprising nuggets of information, Golf Miscellany demystifies the origins and customs of one of the world?s most celebrated game. From the driving range through the U.S. Open, you?ll be entertained with fun, little-known facts. Why do golfers wear collared shirts? Who invented the modern putter? What golfer was famous for saying he dug his golf game out of the dirt? Settle into your favorite armchair, sip on an Arnold Palmer, and find out!