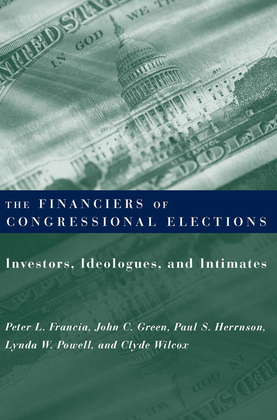 The Financiers of Congressional Elections: Investors, Ideologues, and Intimates

Individual donors play a critical role in financing congressional elections, accounting for more than half of all money raised in House campaigns. But significant donors (defined here as those contributing more than $200) are the least understood participants in the system. Defenders assert that contributing money to campaigns is part of a broader pattern of civic involvement and is free speech that gives a voice to various interests. Detractors argue that these contributions are undemocratic, enabling wealthy citizens to overwhelm the voices of the many and to promote narrow business and policy interests. These divergent assessments were raised in connection with the Bipartisan Campaign Finance Reform Act of 2002 and continue to characterize the debate over campaign finance reform.

So who really contributes and why? How much and to how many candidates? What are the strategies used by political campaigns to elicit contributions and how do the views of significant donors impact the campaign-finance system? What do donors think about campaign-finance reform? This book investigates these vital questions, describing the influence of congressional financiers in American politics.