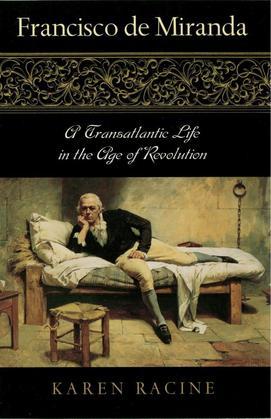 Francisco de Miranda: A Transatlantic Life in the Age of Revolution

Before there was Sim-n Bol'var, there was Francisco de Miranda. He was among the most infamous men of his generation, loved or hated by all who knew him. Venezuelan General Francisco Gabriel de Miranda (1750-1816) participated in the major political events of the Atlantic World for more than three decades. Before his tragic last days he would be Spanish soldier, friend of U.S. presidents, paramour of Catherine the Great, French Revolutionary general in the Belgian campaigns, perennial thorn in the side of British Prime Minister William Pitt, and fomenter of revolution in Spanish America. He used his personal relationships with leaders on both sides of the Atlantic to advance his dream of a liberated Spanish America. Author Karen Racine brings the man into focus in a careful, thorough analysis, showing how his savvy, firm political beliefs and courageous actions saved him from being the simple scoundrel that his dalliances suggested. Shedding light on one of history's most charismatic and cosmopolitan world citizens, Francisco de Miranda will appeal to all those interested in biography and Latin American history.