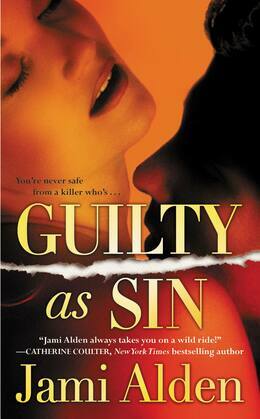 For over a decade, a killer has been waiting, silent as death and . . .
GUILTY AS SIN

Fourteen years ago, Kate Beckett was a teenager more interested in summer romance than babysitting. Then the unthinkable happened: her younger brother was kidnapped and murdered on her watch. Now she is an advocate for missing children, and her newest case brings her back to the small town where she lost her brother-and where she left behind the first boy she ever loved.

Tommy Ibarra's world fell apart after Kate broke his heart, and he's spent his adult life making sure that he'll never be vulnerable again. When a teenage girl vanishes, he offers his expertise as a high tech security expert to help find her. Although he's determined to keep his distance from Kate, it isn't long before he's falling under her spell all over again.

As they race against the clock, their investigation leads to a brutal killer with a shocking connection to Kate's tragic past. And this time, the killer has Kate firmly in his sights.