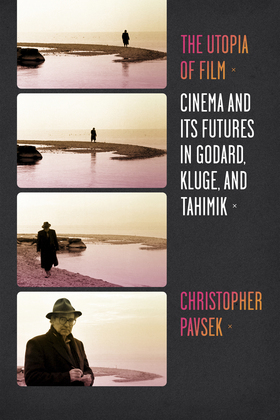 The Utopia of Film: Cinema and Its Futures in Godard, Kluge, and Tahimik

by Christopher Pavsek (Author)
Non-Fiction Arts Film & Video
EPUB
unlimited loans, One at a time
Details
The German filmmaker Alexander Kluge has long promoted cinema’s relationship with the goals of human emancipation. Jean-Luc Godard and Filipino director Kidlat Tahimik also believe in cinema’s ability to bring about what Theodor W. Adorno once called a “redeemed world,” even in the face of new cultural and technological challenges. In three groundbreaking essays, Christopher Pavsek showcases these utopian visions, drawing attention to their strengths, weaknesses, and undeniable impact on film’s political evolution.

Pavsek approaches Godard, Tahimik, and Kluge as thinkers first, situating their films within debates over social revolution, utopian ideals, and the unrealized potential of utopian thought and action. He replays the battle these artists waged against Hollywood interests, the seduction of other digital media, and the privileging of mass entertainment over cinema’s progressive, revolutionary roots. He discusses Godard’s early work, Alphaville (1965), against his later films, Germany Year 90 Nine-Zero (1991) and JLG/JLG: Self-portrait in December (1994), and conducts the first scholarly reading of Film Socialisme (2010) and its new form of utopian optimism. He considers Tahimik’s virtually unknown masterpiece, I Am Furious Yellow (1981–1991), along with his major works, Perfumed Nightmare (1977) and Turumba (1983), in which he calls on the anticolonial impulses of his native Philippines to resist Western commodity culture; and he constructs a dialogue between Kluge’s earliest films, Brutality in Stone (1961) and Yesterday Girl (1965), and his later The Assault of the Present on the Rest of Time (1985) and Fruits of Trust (2009), noting a utopianism deeply indebted to Marx and Adorno yet designed to appeal to modern sensibilities. In the thwarted ambitions, disappointed hopes, and thrilling experiments of these forward-thinking filmmakers, Pavsek reinforces an important chapter in the history of film and its relevance to political filmmaking today.