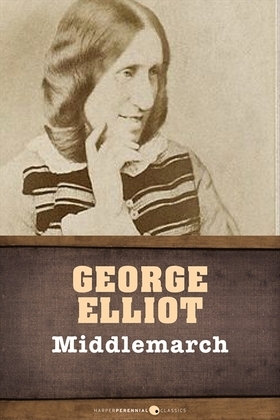 by George Eliot (Author)
Fiction Classics
EPUB
26 Loans, One at a time
Details

In the fictional town of Middlemarch, selflessness, social reform, and romantic love struggle to survive against human foolishness, economic missteps, and societal ideals. Young and intelligent, Dorothea Brooke hastily marries Casaubon, a middle-aged scholar working tirelessly on his “masterpiece,” The Key to All Mythologies. Their union soon sours, and Dorothea becomes trapped in a difficult situation that worsens upon the death of her husband. Elsewhere in town, Tertius Lydgate, an idealistic young doctor, is caught in an ill-fated union with the sweet but superficial Rosamund Vincy. Intertwined within the lives of these two unfortunate couples is the handsome artist Will Ladislaw, who is sympathetic to Lydgate’s ideas about science and medicine, and who develops feelings for his uncle’s wife—Dorthea Brooke.

Through the voices of the characters in Middlemarch, author George Eliot brings to life various issues of her day, including the role of women, the nature of marriage, political reform, and the status of education. Hailed as the greatest novel in the English language by British author Martin Amis, Middlemarch has been adapted twice for television.