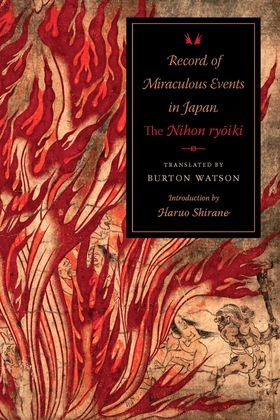 Record of Miraculous Events in Japan: The Nihon ryoiki

by Burton Watson (Translator)
Nonfiction Literary collections Asian
EPUB
Unlimited loans, One at a time
Details
This collection of setsuwa, or “explanatory tale” literature, compiled by a monk in eighth- or ninth-century Japan, records the spread of Buddhist ideas in Japan and ways in which Buddhism’s principles were adapted to the conditions of Japanese society. Beginning its survey in the time before the introduction of Buddhism to Japan, the text captures the effects of the nation’s initial contact with Buddhism—introduced by the king of the Korean state of Paekche—and the subsequent adoption and dissemination of these new teachings among towns and cities.

The Nihon ryoiki provides a crucial window into the ways in which Japanese Buddhists began to make sense of the teachings and texts of their religion, how they incorporated religious methods and materials from Korea and mainland China, and how they sought to articulate a popularized form of Buddhist practice and belief that would not be limited to monastic centers. The setsuwa genre would become one of the major textual projects of classical and medieval Buddhism, with nearly two dozen collections appearing over the next five centuries. The Nihon ryoiki serves as a vital reference for these later works, with the tales it contains finding their way into folkloric traditions and becoming a major source for Japanese authors well into the modern period.