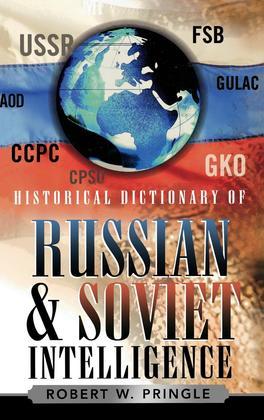 At its peak, the KGB (Komitet Gosudarstvennoy Bezopasnosti) was the largest secret police and espionage organization in the world. It became so influential in Soviet politics that several of its directors moved on to become premiers of the Soviet Union. In fact, Russian president Vladimir V. Putin is a former head of the KGB. The GRU (Glavnoye Razvedyvatelnoe Upravlenie) is the principal intelligence unit of the Russian armed forces, having been established in 1920 by Leon Trotsky during the Russian civil war. The GRU was the first subordinate to the KGB, and while the KGB broke up with the dissolution of the Soviet Union in 1991, the GRU remains intact, cohesive, highly efficient, and with far greater resources than its civilian counterparts. These are just two of the long list of Russian and Soviet intelligence agencies that are covered in the Historical Dictionary of Russian and Soviet Intelligence. Through a list of acronyms and abbreviations, a chronology, an introductory essay, a bibliography, and hundreds of cross-referenced dictionary entries on organizations like the Oprichnina, Okhrana, GPU, NKVD, KGB, GRU, Smersh, SVR, and FSB, a clear picture of the history of this subject is presented. Entries also cover Soviet and Russian leaders, leading intelligence and security officers, the Lenin and Stalin purges, the Gulag, and noted espionage cases.