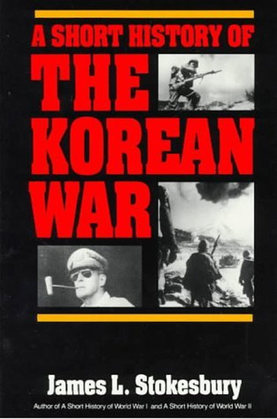 A Short History of the Korean War

As pungent and concise as his short histories of both world wars, Stokesbury's survey of "the half war" takes a broad view and seems to leave nothing out but the details. The first third covers the North Korean invasion of June 1950, the Pusan perimeter crisis, MacArthur's master stroke at Inchon and the intervention by Chinese forces that November. At this point, other popular histories of the war reach the three-quarter mark, ending often with a cursory summary of the comparatively undramatic three-and-a-half years required to bring the war to its ambiguous conclusion on July 27, 1953. Stokesbury renders the latter period as interesting as the operational fireworks of the first six months: the Truman-MacArthur controversy; the political limitations on U.S. air power; the need for the Americans to fight the war as cheaply as possible, due to NATO commitments; the prolonged negotiations at Panmunjom over the prisoner-exchange issue; and the effect of the war on the home front. Whether the United States could have/should have stayed out of the war in the first place comes under discussion: "no" on both counts, according to the author.