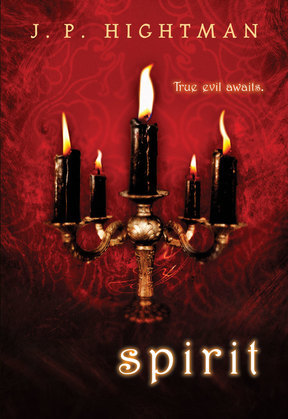 "It's something of a Romeo and Juliet story. There was a young couple in Salem, long ago . . . And the girl's mother, she hated the boy. When the witch-hunting began, mother, daughter, and suitor all ended up at the Blackthorne hanging."

Now, ages later, in the cold, dark heart of the Victorian era—an age of black clothes and black moods—one train is bound for Blackthorne, near Salem, where a winter carnival awaits. The cars are full of the promise of fireworks, sleigh rides, and skating. But for Tess and Tobias Goodraven, this train will take them to a place much darker than they imagined.

Even a seasoned pair of ghost hunters like Tess and Tobias didn't expect a witch like Old Mother Malgore—a witch who stalks the forests, silent as snowfall, hunting, hungering. When the train derails and the casualties climb, the Goodravens must bridge the gap between past and present tragedies if they have any chance of quieting the souls of the living, the dead, and the haunted.

In J. P. Hightman's richly woven story of ghosts and witchcraft, the simple is sinister, the dead stalk the living, and the only real weapon is love.