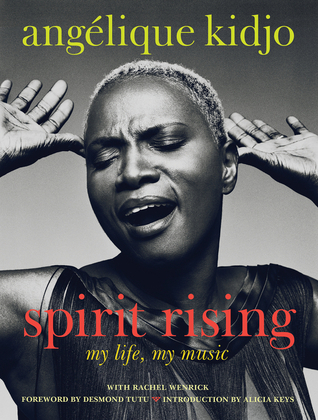 Grammy Award-winning singer Angélique Kidjo is known for her electrifying voice and fearless advocacy work. In this intimate memoir, she reveals how she escaped Communist Africa to make her dreams a reality, and how she's prompting others all around the world to reach for theirs as well.

Born in the West African nation of Benin, Angélique Kidjo grew up surrounded by the rich sounds, rhythms, and storytelling of traditional Beninese culture. When the Communists took over, they silenced her dynamic culture and demanded that she sing in praise of them. In Spirit Rising: My Life, My Music, Angélique reveals the details of her dangerous escape into France, and how she rose from poverty to become a Grammy Award–winning artist and an international sensation at the top of Billboard's World Albums chart. She also explains why it's important to give back by sharing stories from her work as a UNICEF ambassador and as founder of the Batonga Foundation, which gives African girls access to education.

Desmond Tutu has contributed the foreword to this remarkable volume; Alicia Keys has provided an introduction. Her eloquent, inspiring narrative is paired with more than one hundred colorful photographs documenting Angélique's life and experiences, as well as a sampling of recipes that has sustained her on her remarkable odyssey.