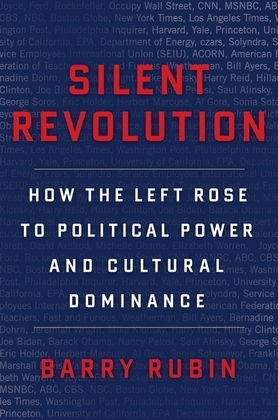 Respected historian and political scientist Barry Rubin exposes the radicalism that masquerades as liberalism today in Silent Revolution, his thorough history that charts the movement's unchecked rise to cultural and political power.

Over the past fifty years, an ideological revolution has created a brand of radical leftism that now dominates the liberal movement in the United States. The values espoused by the left today are a far cry from the traditional progressive and Enlightenment values that have historically defined the movement.

Barry Rubin argues that, after the fall of the Soviet Union in 1989, the survivors of the '60s New Left drew on the ideas of radicals like Saul Alinsky, cultural Marxists like Antonio Gramsci, and Third World revolutionary thinkers like Frantz Fanon to create a Third Left: a radical movement that championed a new class of experts and managers to seize control from within. Silent Revolution explores the formation and ideology of The Third Left and documents how this movement culminated in 2008, when Americans elected the most radical left-wing government in their history.

Concise and hard-hitting, Silent Revolution is a must for all conservatives looking to understand and overcome American liberalism.