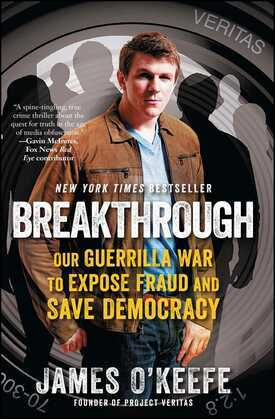 Breakthrough: Our Guerilla War to Expose Fraud and Save Democracy

In this New York Times bestseller, controversial ambush journalist James O'Keefe takes a hard-hitting look at how the media and government conspire to protect the status quo: "A spine-tingling, true crime thriller about the quest for truth in the age of media obfuscation" (Gavin McInnes, FOX News contributor).

Hailed by David Weigel in Slate as having "had more of an impact on the 2012 election than any journalist," James O'Keefe is young, brash, and provocative: a new breed of guerrilla reporter for the twenty-first century. He and his associates have famously infiltrated some of America's most protected organizations and institutions. Now, in Breakthrough, O'Keefe chronicles the harrowing undercover investigation that opened America's eyes to the chicanery of its state houses and the duplicity of the White House during one of the most compromised election campaigns in our nation's history: the 2012 presidential race.

Of all his controversial sting operations, this was the one that his late mentor, Andrew Breitbart, called "his most consequential." While still on federal probation, O'Keefe organized an army of citizen journalists, planned a series of video stings to reveal the American system's vulnerability to voter fraud, and went nose to nose with the most powerful political machine in the world. Along the way, O'Keefe found disheartening evidence that Americans are not nearly as free as we may believe, but also showed just how much real change ordinary citizens can bring about when they are willing to risk the wrath of the powerful.

Free of ideology, Breakthrough is at its core a clarion call for a more ethical society. Despite being vilified and libeled by an establishment media dedicated to suppressing the truth, James O'Keefe has dared to break through the firewall and reshape public opinion by showing things as they really are.