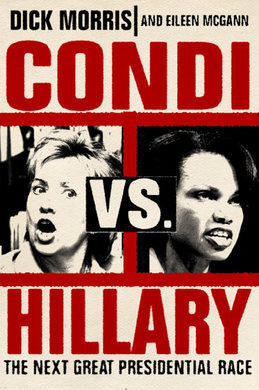 Who will be president in 2008? Many believe that the White House is Hillary Clinton's to lose. As long-time strategists Dick Morris and Eileen McGann reveal in Condi vs. Hillary, however, Hillary's plans for higher office are vulnerable to a challenge from a most unexpected quarter: the Bush administration's secretary of state and former national security advisor, Condoleezza Rice.

Rice is the only figure on the national scene who has the credentials, the credibility, and the charisma to lead the GOP in 2008. And, as this first book on the subject demonstrates, a race between these two commanding, but very different, women is a very real possibility -- and would inevitably prove one of the most fascinating and important races in American history.

Blending insider insight and political foresight, Condi vs. Hillary surveys the strengths and weaknesses of the two candidates, finding persuasive clues about what we might expect from each of them as a chief executive. It traces their very different childhoods -- Hillary Rodham's in unchallenging suburban comfort, Condi Rice's in Birmingham, Alabama, during the civil rights era -- and finds in each the roots of their latter-day selves. It explores their career in public life -- Hillary's as an ambitious liberal who attached herself to a governor on the rise, Condi's as a woman of broad and deep talents who has earned her own way. It turns a discerning eye on how each has spent her time in government, contrasting Condi's growth and maturation in office with Hillary's record of underachievement as both first lady and senator from New York. And it reveals how a draft-Condi movement could sweep the secretary of state into the presidency even as she forgoes campaigning to address her responsibilities as secretary of state.

America, in short, may be on the verge of a perfect storm of twenty-first-century politics, pitting two of America's most popular -- and controversial -- women against each other, and offering Americans a choice between fulfilling the ambitions of one of our most polarizing figures . . . or changing history by electing not just the first woman, but also the first African American woman, to lead the free world into the future.