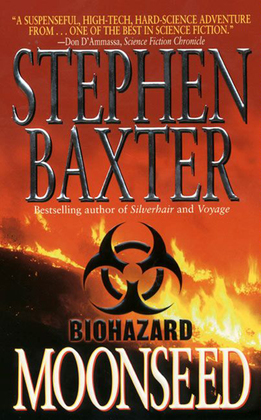 It starts when Venus explodes into a brilliant cloud of dust and debris, showering Earth with radiation and bizarre particles that wipe out all the crops and half the life in the oceans, and fry the ozone layer. Days later, a few specks of moon rock kicked up from the last Apollo mission fall upon a lava crag in Scotland. That's all it takes . . .

Suddenly, the ground itself begins melting into pools of dust that grow larger every day. For what has demolished Venus, and now threatens Earth itself, is part machine, part life-form: a nano-virus, dubbed Moonseed, that attacks planets.

Four scientists are all that stand between Moonseed and Earth's extinction, four brilliant minds that must race to cut off the virus and save what's left of Earth--a pulse-stopping battle for discovery that will lead them from the Earth's inner core to a daredevil Moon voyage that could save, or damn, us all.