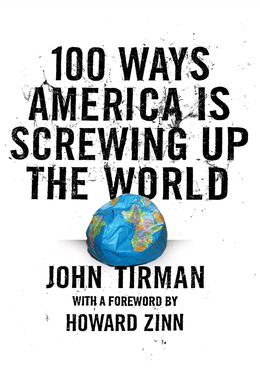 100 Ways America Is Screwing Up the World

What do George W. Bush, Wal-Mart, Halliburton, gangsta rap, and SUVs have in common? They're all among the hundred ways in which America is screwing up the world. The country that was responsible for many, if not most, of the twentieth century's most important scientific and technological advancements now demonizes its scientists and thinkers in the twenty-first, while dumbing down its youth with anti-Darwin/pro-"Intelligent Design" propaganda. The longtime paragon of personal freedoms now supports torture and illegal wiretapping—spreading its principles and policies at gunpoint while ruthlessly bombing the world with Big Macs and Mickey Mouse ears.

At once serious-minded and satirical, John Tirman's 100 Ways America Is Screwing Up the World is an insightful, unabashed, entertaining, and distressing look at where we've gone terribly wrong—from the destruction of the environment to the promotion of abhorrent personal health and eating habits to the "wussification" of the free press—an alternately admonishing and amusing call to arms for patriotic Blue America.