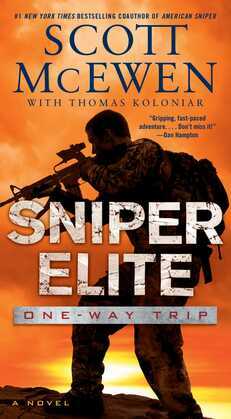 From the coauthor of the #1 New York Times bestseller American Sniper?the critically acclaimed memoir of SEAL sniper Chris Kyle?this “inspired by true events” thriller follows one of America’s most lethal marksmen as he leads the rescue of a downed female Special Ops pilot.

ONE TEAM. ONE SHOT. ONE WAY.

In direct defiance of the president’s orders, Navy Master Chief Gil Shannon, one of America’s most lethal SEAL snipers, launches his own bold mission comprised of SEAL Team Six and Delta Force fighters to free a female helicopter pilot being held and brutally mistreated by Taliban insurgents in Afghanistan.

The president fears a botched rescue would be a foreign policy disaster?and the end of his term. But once the special ops community learns that one of their own has been taken hostage, there is no executive order strong enough to stop them from going in?whatever the risks.